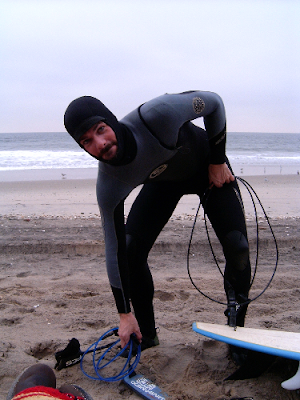 This morning for the first time since I have known GK, he had the chance to go surfing and didn't. There are several factors at work here. One, he went yesterday. He got some good rides in but the water was frigid cold as you can imagine, and even with his beautiful new wetsuit (see above) he got pretty dang cold. And two, when he looked at the live feed that he checks daily online it looked a bit like yesterday... good waves with long flat spells in between. Usually that's enticing. I think sometimes he likes talking to the other surfers as much as he does riding the waves. But this morning with a winter ocean-inflicted sinus infection from the huge frozen waves, he decided not to make the trek.

He'll get another chance soon, that's probably the third factor. He goes quite often. But the extra fun thing about yesterday was that I went with him. Before you think I'm really brave (or crazy), see the photo below. We took the train for a little over an hour transferring twice. We got off at Beach 90th street, and as the name suggests it's about a block and a half from the beach. Once on the beach, I set up camp in my awesome chair that we inherited along with our apartment, my warm clothes and my cocoa. 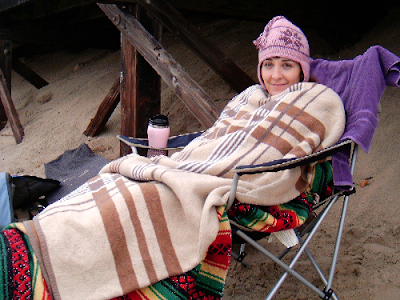 This picture captures the cold, but what it doesn't adequately capture is how beautiful it was. The sun was shining, the water was beautiful, the sky was clear. And after a short time on the beach I warmed right up and even shed some of my layers.

It was fun to watch GK surf. I really love the effort he makes to continue doing it out here. I love it when he comes home from surfing and is exhausted but ecstatic. There is something in the ocean that recharges him. But the waves yesterday let me see a new level of ability in my surfer. He's really good. When people ask if GK wants a boychild or a girlchild, he just says he doesn't care as long as it's a surfer. I'm excited for him to be able to share that with our little one.

And I'm grateful to be close to water.

tell GK to watch out for the rocks, he probably doesn't know they are out there.

I would have never guessed you would marry a surfer. He somehow seems just right for you- shows how much I know. Our kids have loved the ocean; we don't get to go often, but when we do- they're in heaven.

How did GK do in Denver? Was it hard to be landlocked? I have never heard your love story. Does the ocean soothe the morning sickness? You look smashing in a hat and blankets!

GK and Susanna! I found your blog through Kristy's and I just read your news! CONGRATULATIONS! I am elated for you two! That is going to be one lucky kid. GK--you are such a "soul surfer" what can I say? Ha ha! Susanna good job for going and watching--you are a trooper! I always feel excited/proud when I watch my husband surf too :) Good to see you are doing well and Congrats again!

G.k.,
You're lucky you can take the train to the beach. Being stationed in D.C., I have not been able to do much surfing. I miss the West Coast! Some of my best memories with you man were while we were surfing. Good times!
John

hey guys, can i come hang out with susanna on the beach sometime? that looks delightful.
suvi