The Blessings of Early Morning Seminary 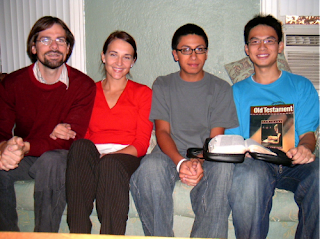 This is our early morning seminary class so far. There are others on our roles, but for the first two weeks, Edwin (sitting next to me looking a little uncomfortable to be so next to the teacher) and JJ (who made us hold the photo so that he could grab his manual and scriptures) have been there bright and early to talk about the stories of the Old Testament. They are such great kids. We actually have class at Edwin's house. His mom is the stake Young Women's President and is also on a mission to another branch in our stake where her husband is in the branch presidency. They are an amazing family. JJ moved here from China two years ago to live with his mom who has been a member since she arrived in the United States eight years ago. He was taught by the missionaries, was baptized and now is preparing to go on a mission.

I'm not proud to admit that I was a seminary drop out. In four years of high school, I completed two non-consecutive semesters of seminary. I never really thought much about it after that. But as GK and I teach these kids, I realize what a loss that was and how blessed I am to be getting another chance.


So this is how our days begin. We wake up sometime close to 5am (depending on how much primping is necessary, we push it as late as 5:25), we get dressed and ready, leave the house at 5:45 to go catch the R train out to a place called Bay Ridge. On the train we review the lesson plan we put together the night before and just read a little). The train times are always different, so sometimes we get there 20 minutes early and we get a bagel (directly from the oven) and cream cheese, and sometimes we rush straight from the station to arrive at the Herrera home at 6:41 (class starts at 6:40).


Then we teach our lesson until 7:30 and take the train back home. Almost always, the lesson or the questions Edwin and JJ ask initiates a conversation that doesn't end until GK has to go off to his internship or until we get home and have to take a quick nap before the rest of the day. 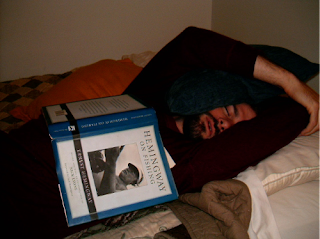 This is GK after a morning of Seminary. He was just communing with Ernest Hemingway and learning about his fishing adventures until... 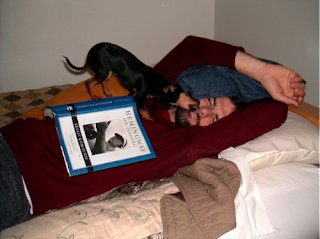 Reggie (who sleeps through seminary) decided that enough was enough and it was time to be up and at them. 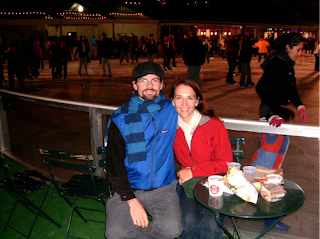 To celebrate two good weeks of waking up early and studying the Good Word. GK asked me on a date. He didn't tell me where we wer going, but he picked out my warm weather apparel and told me where to get off the train. We got off at Bryant Park and stopped at a little place to get some hot soup. As we walked out of the subway I said, "GK, you have socks in your back pocket. Did you know that?" He said, "Oh yeah, I found some other ones, will you put those in your purse?" I did. Then when we came out of the restaurant I said, "Hey look at those people over there. Are they ice skating?" He laughed at me. It must be fun to have someone around who's so dang easy to surprise. This is us eating our "Hale and Hearty" soup right by the skating rink. Then we strapped on our skates and made a night of it. It's a good life.
Posted by Susanna at 7:09 PM

Wow, I just never imagined you guys having to wake up so early every day. That is very brave of you. I thought that I was going to be cursed, I mean lucky, to have that calling this year. With the pregnancy I am not sure that would have worked too well. It's nice to hear what is going on with you guys. We miss you soooo much!

Hey you two! It look like you are doing great in New York. It sounds like a lot of crazy, fun! It's good to see you here!

good girl finally going to seminary! thanks for keeping us updated on city life!

The picture is a classic__my theory is that Reggie is so small that the world moves relatively slow for him than it does for us, allowing him ample time to get his whole tongue right up your nostril in an instant!