New Hampshire: the Land of Enchantment

On Friday about a week and a half ago, we packed up our little car and headed for the hills of New Hampshire to celebrate GK's birthday and yet again escape the crazy city. We were excited to see some of the changing leaves and visit a few sites from GK's missionary days...
We drove up through connecticut and massachussets and into New Hampshire and it rained off and on the whole way up. But since the forecast had only given a 30% chance of "light rain" we weren't too worried. We were sure it would clear up. They were exactly right. It rained 30% of our time there 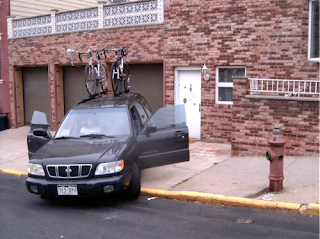 We arrived at around 6pm and set up our tent in light rain while Reggie waited in the car. 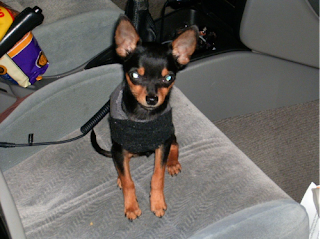 We ran to a little store in the town to get firewood and a couple of last minute provisions so we could settle in for the night. But as we drove back to our campsite it started to rain harder and harder and the fog grew more and more dense. This is a picture of our tent the next morning when things had cleared up a bit. 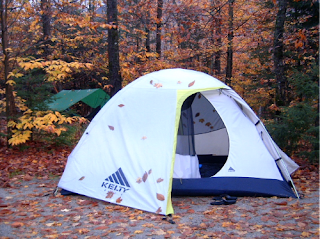 But since we were too hungry to wait for morning to eat, we cooked a little "New England Clam Chowder" on our propane burner under the rainfly of our absolutely amazing tent. This is GK prepping for cooking. 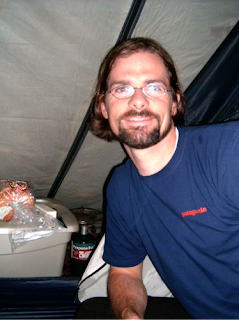 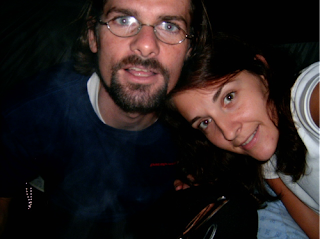 I tried to get the chowder on our little homemade table in our tent, but all you get out of it is our faces looking a little funny. Through the night, it rained so hard and the wind blew so fiercely that we both bolted upright in the middle of the night a few times sure that we were going to get soaked. But our amazing little tent (a present from Eddie and Carline, GK's brother and sister-in-law) stayed strong and dry. I have never experienced anything like it. In fact, we had set up our tent under a bunch of beautiful trees that were covered in beautiful, multi-colored leaves. But in the morning, the ones in our campsite were almost completely bare, and the whole mountainside accross from us was totally naked. 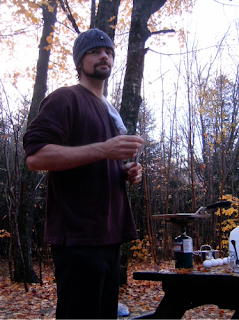 In the morning Chef GK made pancakes and eggs, but since we didn't want to use one of our eggs in the pancake batter and we hadn't been able to bring ourselves to pay $11 for a tiny little tin of maple syrup, they ended up resembling eggs but tasting like nothing I've ever had before. But they were yummy when we poured milk over them and made our own kind of porridge. 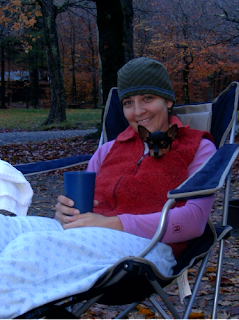 While breakfast cooked, Reggie and my hot chocolate kept me toasty warm. It was so cold that even with two sweaters (made from socks) Reggie couldn't stop shivering, so I cut up yet another sock and tried to make him a hat. He kept shaking his head and it would come right off. Don't show this picture to the folks at Maxfund where we got him, or they might come take him from us. 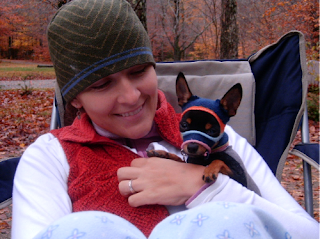 After our amazing breakfast, we went on a beautiful hike to a little hut just below the summit of Mt. Lafayette (said with a french accent since we were so close to Canada). Reggie started in my vest, but not long into the hike he jumped down and led the way. He was amazing. 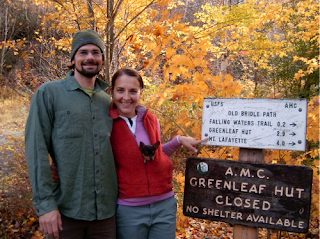 We named this Reggie's Rock. We tried to get it on video so you could see how steep it was. He went up it like five times. He loved it. 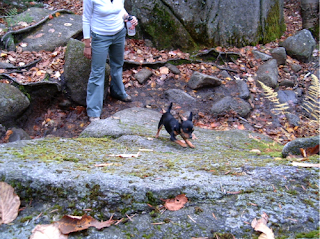 At the hut we were really glad that we had brought so many layers (and so many snacks). The winds were biting cold and the temperature dropped significantly. 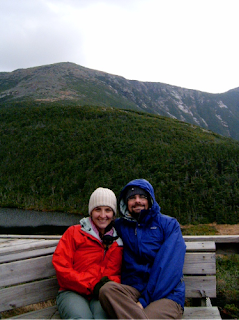 We headed back down the mountain, and by the time we got back to our campsite, the roads had dried enough for us to go for a bike ride. There is a beautiful bike path that goes on forever. We road through and saw some a amazing views. Here you can see a little more clearly how many of the leaves were already gone from the trees. 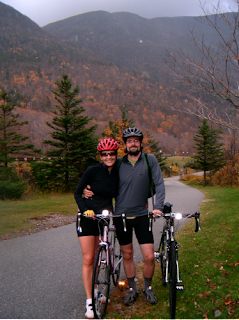 After this picture (we call it the Risser Leg Shot), our pitiful little digital camera froze, so the rest of our documentation is on GK's video camera. So that's it for photos, but after our ride we had another wonderful campfire meal and went to bed.

In the morning we drove to Vermont and I got to see the first house that GK lived in on his mission and his first church (which has quadrupled in size). And then we got in the car and started to drive. After a while I saw a sign that said "Turn off for Joseph Smith Birthplace Monument". I jumped an pointed and said, "GK! Did you know that was here?" He laughed at me and said there had been four signs before that one and every time he had looked at me to see if I had noticed, but I was caught up in watching the scenery and daydreaming.

The monument was beautiful. It was simple. But it really struck me that Joseph Smith was a real man and was a boy on this land. I don't know why that was so new, but it was a beautiful, simple testimony to me.

Thanks for reading, I will be better at posting more regularly so my posts don't have to be so long. We are finally having the internet installed at our house TOMORROW!

Reggie looks like a Mexican Wrestler in his hat/face mask! What a lovely trip. I've always wanted to do a fall trip like that in New England area.

Hey there east-coasters! This trip looks fabulous, glad you stayed warm and enjoyed the colors, I love catching up with you!

This is great; just the kind of posting that we love to read and see.

What a fun little get away! I have to say that I'm jealous of the seasons that you have on the East Coast. We're still dealing with the tail end of summer here. 85 degree weather in November....I can't believe it!

Its so beautiful there! I loved looking at the pictures and hearing about your adventures. It looks really cold too but it sounds like you guys had fun. I'm glad you are taking advantage of all the wonderful places to experience back east! Maybe someday we'll be able to see all these places too!

The pictures are great. I downloaded them all into my flash drive and show them on my Pandigital picture frame and we can print them out too. You got mom all teary eyed about New England and she spent about 3 hours yesterday looking at real estate in Rutland County Vermont.